Evolution of a Logo

This past month I've been working with a friend of mine, Shawn Bellah, on rebranding Galaxy Gameworks in preparation for GDC.  This is a kind of big deal, because this is the birth of the company in the public eyes, and I want to make sure it's as fun and professional as possible.

One of the important pieces of this process is the logo.  The logo should be distinctive, simple, and say something awesome about your company.

We went through a very iterative process during the logo development.  We started with a bunch of brainstorming sketches that Shawn had done, where we looked at different ideas to use with the logo.  We liked the double-G play in the company name, and geeked out on the space theme.  We looked at lots of pictures of galaxies and nebulae, and tried a few different ideas like interlocking G's, where the top of each G was an arm of a spiral galaxy, another where the G was the center of a galaxy seen edge on, another where the G was made of welded steel plates surrounding a galactic center, etc.

But I kept coming back to the first sketch that he had done to warm up, which was a solar system with the planets aligned to form the cross-bar of the G.  I felt a connection there, and I wanted to go explore the planets, and above all it just looked interesting.

So he played around with that idea, creating a galaxy suggestive of the letter G with some larger stellar objects to create interest:

We settled on one of the variants with a nice angle, the planets in alignment and a glow in the middle:

That looked nice, but wasn't suggestive enough of the G, and was a little too complex for our purposes.  So Shawn removed the planets and the tail, and thickened up the lines considerably:

This was simple and showed off the two G's nicely, but I didn't really like the bulge on the outer G, so I used my crude art skills to trim it to show what I was thinking, and Shawn came back with half a dozen variants on what I was showing him.

At that point, both Lauren and I had been staring at it for too long to have any reasonable fresh opinions, so I showed the options to some friends who were artists, and they unanimously picked one of them.

So, a little more polish and we have our final logo! 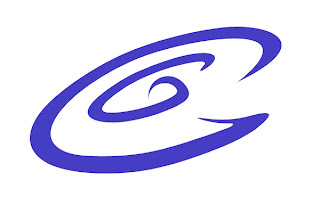 It's clean, simple, and has the double G with a galaxy motif.  Perfect!
Posted by slouken at 7:49 AM